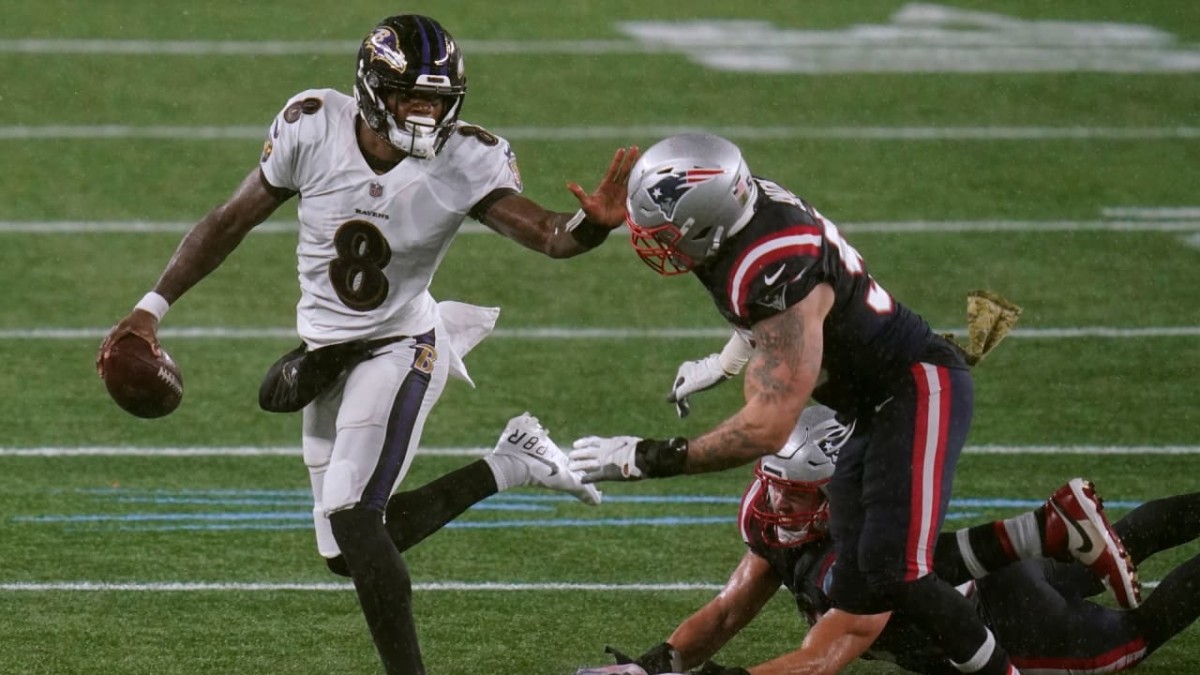 Imagine the surprise when the New England Patriots landed at (or at least, near) the top of the lists of several major sports books for Jackson’s potential suitors?

On the surface, it makes some sense.

With incumbent starter Mac Jones having already been relegated to the cutting-room floor by a fairly vocal section of the fanbase, the ‘hot take hotel’ suddenly found itself devoid of vacancies. In fact, if you listen closely, you could hear that same section of fans belting out a chorus of “Hit the road, Mac” as they pondered whether linebacker Ja’Whaun Bentley would be willing to part with his No. 8 jersey for Jackson’s arrival.

The interest surrounding Jackson is clearly understandable. When healthy, he is among the most exciting players in the NFL. At only 26 years old, he had led the Ravens to a 45-16 record as their starter, boasting a .738 winning percentage. During his MVP tilt in 2019, Jackson led the league in touchdown passes with 36, while tossing only six interceptions. The Louisville also product threw for 3,127 yards and ran for another 1,206 yards and seven touchdowns.

In 2022, Jackson still finished the season with 2242 passing yards and 17 touchdowns, combined with rushing for 762 yards and three scores via the ground game. It should be noted that a PCL sprain kept him out for the final month of the 2022 regular season as well as Baltimore’s playoff loss to the Cincinnati Bengals on Wild Card weekend.

Though injuries have caused a decline in his numbers over the past three seasons, Jackson’s electric style of play, combined with his dual-threat capabilities easily make him the most sought-after player to potentially hit the market this season.

As such, how could New England NOT be interested in securing his services?

Like all major decisions, it comes down to money and means — which, in turn, has caused the rumors connecting him to the Patriots to significantly cool.

For starters, the Patriots have one (as in Jones, as their top option at quarterback) currently on a moderate rookie deal. While few, if any, would question whether Jackson would prove to be a considerable upgrade, Jones’ 2022 output was still respectable enough to give the Patriots pause to assume the cost of acquiring the extraordinarily talented quarterback.

And, the cost would be steep, to say the least.

New England currently sits with $34,313,070 in available salary cap space, per Patriots salary cap expert Miguel Benzan. As he prepares to enter free agency, Jackson is expected to seek a new contract with a similar duration and financial framework to that of the Cleveland Browns deal with Deshaun Watson deal (five years, fully guaranteed $230 million, with a $44.97 million signing bonus) or the Arizona Cardinals’ extension with Kyler Murray (five years, $230.5 million, which is set to commence in 2024.

While theoretically not impossible, the market price for Lamar Jackson as a free agent seems a bit too rich for New England’s wallet.

Then, there is the franchise tag.

Baltimore’s recent five-year, $100 million extension with linebacker Roquan Smith keeps the option of tagging Jackson very much on the table.

If the relationship between Jackson and the Ravens is beyond repair (more on that in a moment), Baltimore has two practical options. Taking the transitional tag out of the equation (which equates to little more than a market-gauging negotiating tactic) the team has the option of placing either the non-exclusive tag, or the exclusive tag on their current face of the franchise. Should the Ravens opt for the non-exclusive tag, Jackson would be free to sign with a team willing to part with two first round draft selections. The exclusive version of the tag would allow Baltimore to negotiate a trade with a team, convince Jackson agree to such trade and then sign the franchise tender.

Whereas a trade may include some existing pro-level talent, the primary components of any deal would be draft picks — high-level draft picks.

For example, 34-year-old Russell Wilson was valued at a packaged which featured a pair of first-rounders and second-rounders in 2022 and 2023, respectively. The Browns sent three first-round picks (2022, ‘23, ‘24), plus a third and a fourth to the Houston Texans to acquire Watson.

Though any compensation package for Jackson is purely speculative at this point, it is reasonable to assume that the aforementioned deals would include similar parameters. For a team which places an emphasis on value for their draft picks, as well as having multiple needs with which to use them, it is hard to conceive New England making a comparable deal.

Lastly, and perhaps most significantly, the Ravens have yet to indicate that Jackson will even be available. Both coach John Harbaugh and general manager Eric DeCosta told The Baltimore Sun on Thursday that they expect Jackson to remain with the team. In spite of his knee injury, the Ravens know Jackson’s value to the franchise better than anyone. Though they may proceed with caution, while taking under account his statistical regression, the Ravens brass has indicated a willingness to involve Jackson on the hiring of a new offensive coordinator, to replace the departing, Greg Roman.

In the final analysis, the financials and logistics appear outweigh the excitement of the dream when it comes to the Patriots potential acquisition of Lamar Jackson. Bill Belichick and the Pats front office will continue their own offensive coordinator search, while determining the best course of action for their football team in 2023.

Though a potential union between the two sides cannot be completely ruled out, the chances of it actually happening are lessening by the day.

New England and beyond! Get your Patriots game tickets from SI Tickets … here!

Want the latest in breaking news and insider information on the Patriots? Click Here