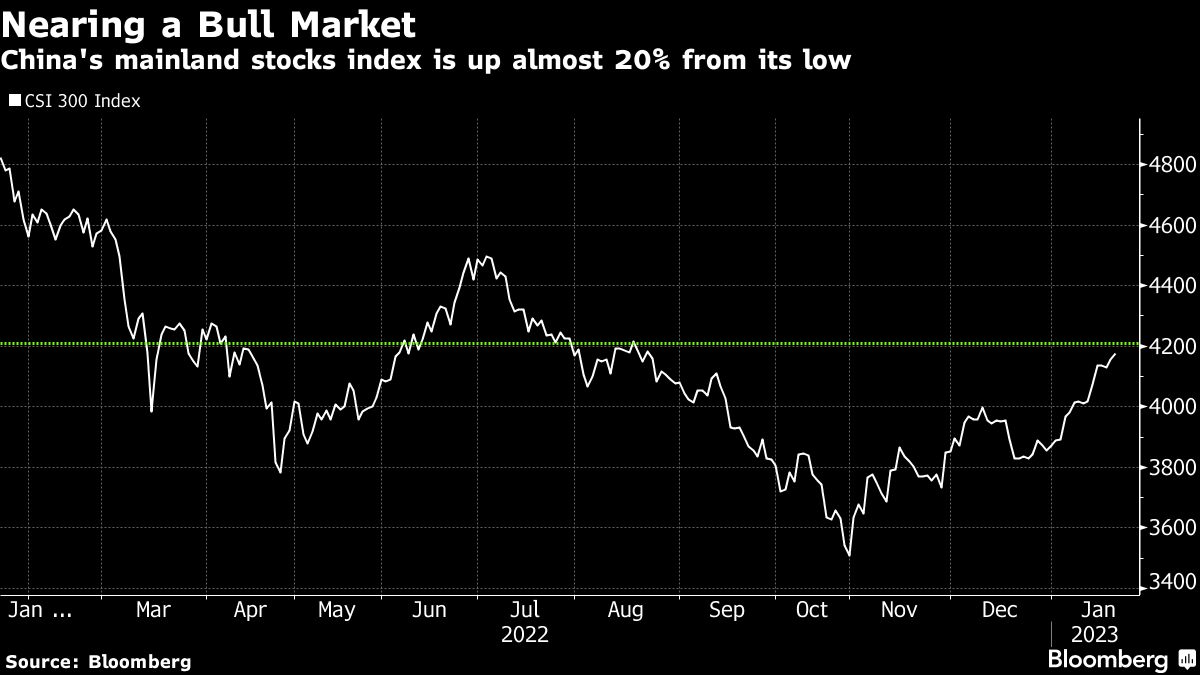 (Bloomberg) — Timing a strategic (rather than tactical) re-entry into Chinese stocks continues to split ultra-bullish strategists and wounded investors wary of another regulatory grenade from Xi Jinping’s government.

Most Read from Bloomberg

While the buy China idea might be crowded, the trade itself definitely isn’t, as I wrote this week. Positioning among non-Asia funds remains light, with long-only investors still significantly underweight China. People aren’t really putting their money where their mouth is. Not yet, anyway.

Which brings us to China’s Lunar New Year holiday next week. Recent macro chatter has been all about better-than-expected economic data out of Beijing, and the prospect of a pick up in consumer spending.

Assuming that festivities don’t change the trajectory for Covid, China optimists may be closer to placing their bets soon after ushering in the Year of the Rabbit.

Here’s my roundup of the week’s key developments for China markets.

Vice Premier Liu He struck an optimistic tone in Davos, telling the gathering China’s economy will rebound to its pre-Covid growth trend this year. December data for retail sales and industrial output was far better than forecast, showing resiliency even as the Covid Zero exit wave spread throughout the country.

China’s population shrank in 2022 for the first time since the 1960s, due in no small part to the fewest births in more than 70 years. The trend is a threat to China’s economic growth, which has been predicated on a vast labor supply. India may have already surpassed its neighbor as the world’s most populous nation.

Dutch and Japanese export controls to China may be finalized as soon as this month. The restrictions on the sale of semiconductor equipment are unlikely to be as tight as those planned by the Biden administration, but they will still see China further cut off from the tech and know-how needed to build the most advanced chips.

WallStreetBets idol Ryan Cohen took an activist stake in Alibaba Group Holding Ltd. and is pushing for more shareholder rewards. Cohen’s sway over the board will, however, be limited by the Chinese government’s golden shares. Alibaba co-founder Jack Ma landed in Hong Kong, an appearance the market took positively.

Didi Global Inc.’s ride-hailing app appeared in Chinese app stores, allowing it to bring in new users for the first time since Beijing punished the company with a ban in July 2021. There will soon be a new competitor in town — a similar state-launched app for public employees called “Strong Nation Transport.”

China’s home prices fell for a 16th month in December, extending the longest downturn in history. The declines came after policy makers unveiled a sweeping plan to revive the market. They’ve done a lot more since, including a plan to channel cheap loans to developers via bad-debt managers like China Huarong Asset Management Co.

… and three things to watch for next week

Note: This Week in China will resume Feb. 4 after the Lunar New Year break.

Most Read from Bloomberg Businessweek