Chip stocks have fallen deeply out of favor over the past year or so partly on news that semiconductor industry revenue is expected to decline this year after an extended growth period in recent years. The Philadelphia Semiconductor Sector index plunged 27% over the last 12 months, trailing the S&P 500 index decline of 14.8%.

Weak near-term prospects for the industry only reinforce the investment case for Advanced Micro Devices (AMD -4.00%). AMD is continuing to grow much faster than the chip industry, and the best thing is that the stock trades at a relatively low valuation that sets up attractive returns for patient investors.

Here are three reasons AMD is a great stock to buy for 2023 and beyond.

1. AMD’s CEO is worth betting on

When comparing AMD’s growth over the last three years to its primary competitors, Nvidia (NVDA -3.52%) and Intel (INTC -1.35%), it’s not even close. AMD’s most recent quarterly revenue was 2.6 times higher than the end of 2019, even surpassing the strong growth of the graphics specialist. 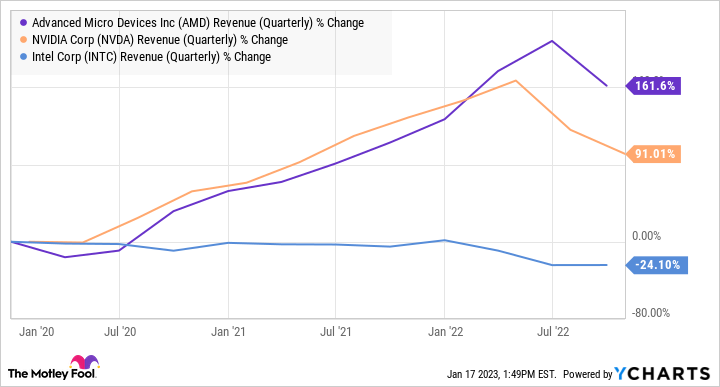 When CEO Lisa Su was hired in 2014, AMD was mostly dependent on the PC market. Su immediately got the company focused on the high-performance market for enterprises and data center operators (e.g., hyperscale computing). The result was that AMD’s x86 chip market share across PC and data center increased from 14% in 2018 to 30% last year.

Specifically, in data center, AMD improved its market share from just 3% four years ago to 18%, and there is room for more gains in 2023.

One reason the stock underperformed last year was AMD lost share in desktop and mobile processors in the third quarter. This caused some alarm for Wall Street, as the stock hit a 52-week low of $54.57 in October before rebounding to its current share price of $72.

Investors might be starting to realize that AMD doesn’t need to beat Intel in the PC market for shareholders to make a return on the stock. The main thrust of AMD’s growth is coming from its gains in the data center space. In this market, AMD picked up an additional 7.3 points of market share in the third quarter compared to 2021, according to Mercury Research.

While Intel is spending billions to build factories in the U.S. to safeguard its supply chain from disruptions in Asia, AMD is keeping its foot on the gas. It just launched its new generation of data center chips in November, with Alphabet‘s Google, Oracle, and Microsoft already on board as customers. The new Genoa chips deliver a huge leap in performance over the previous generation, and later this year, the company plans to launch an advanced version of the same chip, Genoa-X.

AMD is also giving Nvidia more competition with its new Instinct MI250 GPU accelerators. Benchmarks have already shown the Instinct 250 outperforming Nvidia’s A100 data center GPUs. While Nvidia should retake the performance lead with the H100 that is ramping up in 2023, AMD is clearly not far behind.

3. The market is underestimating AMD

Despite everything that is going right for AMD, I wouldn’t call the stock a buy if it wasn’t trading at such an attractive valuation. Compared to Nvidia and Intel, AMD’s forward price-to-earnings ratio of 19.6 based on this year’s earnings estimates is too low compared to its growth prospects. 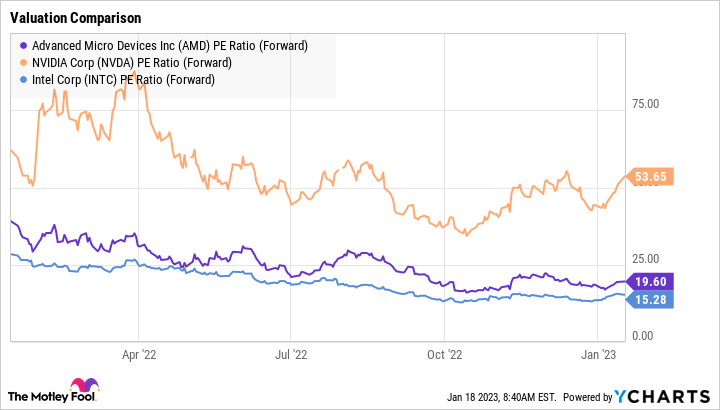 If sluggish Intel is worth 15 times its earnings, then AMD’s superior growth record should be worth significantly more than 20. AMD has an expanding addressable market currently estimated at $130 billion that is expected to more than double by 2025. For these reasons, investors should ignore the ups and downs and hold the stock for 10 years. It should be worth a lot more than what it’s trading for today.