The financial industry is one of the cornerstones of the economy; it’s worth nearly $5 trillion in the U.S. alone. But the waters can get choppy at times, including now, as rapidly rising interest rates put a squeeze on credit. There are financial technology companies that are bringing innovation to consumers, but tougher credit markets have hurt their businesses.

This could be an opportunity for long-term investors; these three stocks are poised to flourish when economic conditions ease up, so consider them before the bear market ends.

First, it hurt demand for loans because consumers were less willing to borrow at higher rates. Second, interest rates changed so quickly that Upstart struggled to sell some of its loans, and instead had to hold them on its balance sheet. Upstart doesn’t want to service loans as a bank would; it would rather sell them to remain asset-light like a technology company.

But there are some clues that Upstart’s business is still fundamentally intact. Banks and credit unions continue partnering with Upstart; lending partners increased to 83 in the third quarter of 2022, up from 31 a year ago.

If lenders weren’t confident in Upstart’s technology, they probably wouldn’t be willing to work with it. Additionally, Upstart publishes quarterly data to show how it separates credit risk, and Q3 data showed Upstart as roughly five times as effective. In other words, Upstart’s credit grading scale more truly reflects a borrower’s likelihood of default than FICO. 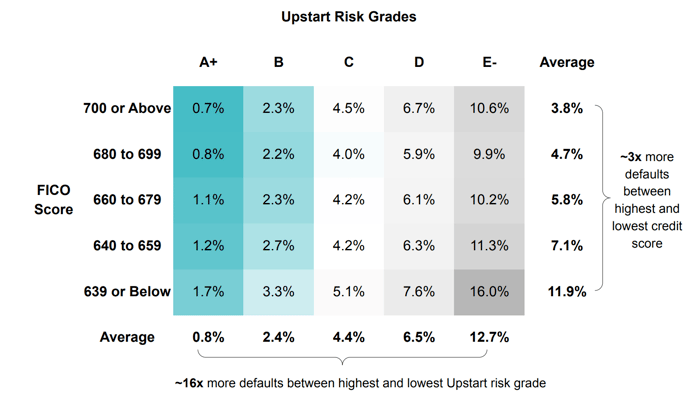 The stock has fallen to a price-to-sales ratio (P/S) of just 1.5 from as high as 48 two years ago. Upstart must still navigate this challenging economic environment, but there are plenty of growth opportunities ahead for a company expanding its loan products and partnership network. Even if the valuation remains where it is, Upstart’s business could be much larger, which means potential investment returns for patient investors.

Buy now, pay later (BNPL) has become a frontline challenger to credit cards as consumers’ credit tool of choice. Affirm Holdings (AFRM -5.62%) is one of the prominent companies in that market. People shopping on Affirm can buy from nearly 245,000 merchants and get discounts and flexible payment terms on each purchase, including a fixed number of installments — some interest-free. Affirm treats each transaction as a new loan; that means every purchase is scrutinized separately, and payment terms are offered accordingly.

Understandably, a tightening credit environment, and the end of federal stimulus checks for consumers, has hurt Affirm’s business. Just over 3% of Affirm’s balances were delinquent as of October 2022, a nearly 50% increase from a year ago.

However, there is some cushion in Affirm’s financials; the company is using just 66% of its total funding capacity, its lowest in more than two years. Additionally, there is $2.7 billion in cash on the balance sheet. Investors should monitor delinquency rates and make sure cash losses don’t soar, but now doesn’t seem like the time to panic. 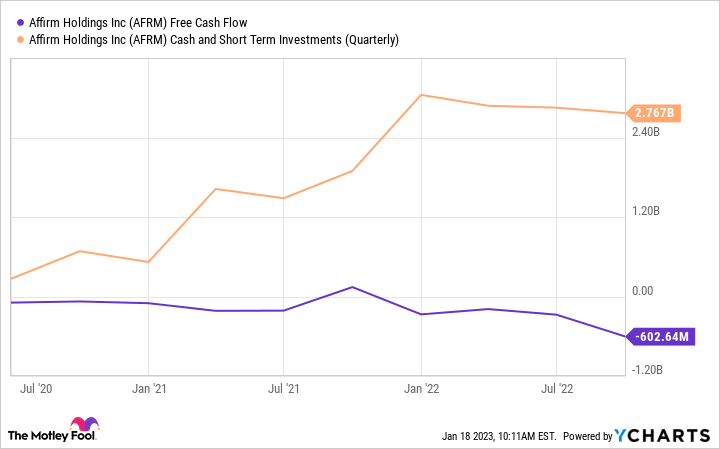 From a growth standpoint, Affirm is doing great; its consumer base grew 69% year over year in the quarter ended Sept. 30 to 14.7 million. It has partnerships with several of America’s largest retailers, including Amazon, Target, Walmart, and Shopify.

The stock’s valuation has fallen to a P/S of 2.6 from as high as 47 despite continued growth. Affirm seems like a strong company in an industry that’s hit a down cycle. If Affirm’s balance sheet stays solid, the stock will be an excellent rebound candidate when the next market rebound begins.

There are a lot of new companies out there changing the way we do things; not all will make it. Payment services company Marqeta (MQ -2.16%) could be a way to play the field.

Marqeta’s software enables companies to create custom payment solutions that work with existing financial networks. For example, Instacart uses Marqeta’s technology to fund payment cards for its shoppers so they can only buy the approved items on their order. Marqeta also works with companies ranging from Uber to DoorDash to Block (Cash App). 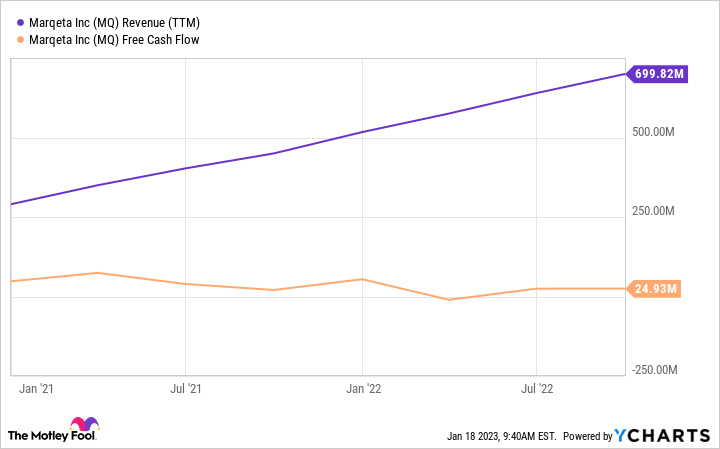 Marqeta generates revenue by taking a small fee on each transaction its software powers, so it doesn’t have direct exposure to the credit markets. However, this makes it a volume-based business, so a recession could hurt Marqeta if fewer people use the apps it powers.

You can see in the chart that Marqeta’s revenue has rapidly grown to date, and the business is generating cash profits already, making the company more durable in a down market. Marqeta relies heavily on its Cash App business with Block, which is something to consider over the long term.

The stock’s valuation has fallen from a P/S ratio of 45 to just 5, another example of how the current bear market has collapsed valuations of fintech stocks across Wall Street. But given the company’s positive free cash flow and continued revenue growth, Marqeta appears fundamentally intact. It may not happen overnight, but Marqeta’s continued growth and a valuation rebound as the market recovers could set investors up for substantial price gains.