With the Nasdaq Composite down nearly 35% from its all-time high, the index has a long way to go before emerging into bull-market territory. Among the index are several names that have been heavily sold off. While the initial sell-off phase was warranted due to extreme valuations, sellers have gone too far, giving new buyers the advantage.

Among the names investors will be kicking themselves for not buying now are Amazon (AMZN 4.16%), MercadoLibre (MELI 0.38%), and Airbnb (ABNB 2.88%). This trio is a proven group of winners, and I think 2023 will be a turnaround year for their stocks.

The latest headline from Amazon isn’t a positive one: 18,000 employees laid off. But, despite the negative connotations layoffs typically have, most investors applaud this move.

After aggressively hiring to support increased demand in the year prior, Amazon is backtracking to correct some of its mistakes by cutting jobs in its physical stores and the people, experience, and technology groups. Still, compared to the 1.54 million employees it had at the end of the third quarter, that’s just over a 1% reduction in its workforce, so there won’t be massive cost savings.

Reversing this trend is critical for Amazon as an investment, as operating expense growth has far outpaced revenue growth lately. 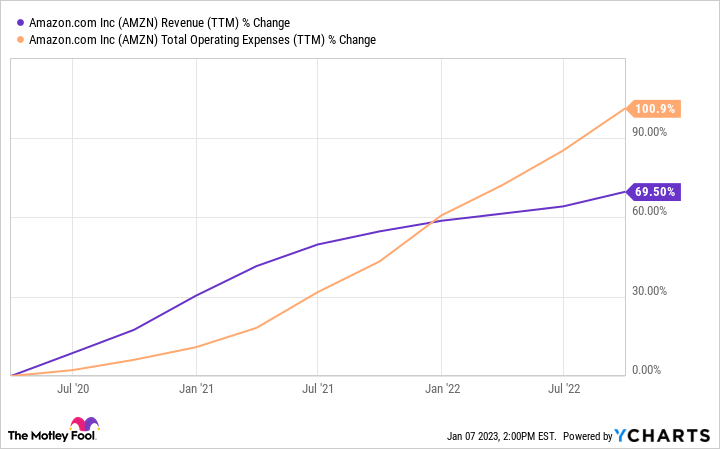 Fortunately, management understands this and is enacting various cost savings measures (besides layoffs) to reduce this expense. Nevertheless, investors are skeptical, which is why the stock is valued so low at 1.7 times sales — nearly its lowest valuation since 2010.

I’m counting on management to right the ship, which presents a huge upside when profits swing in the positive direction. With Amazon’s stock on sale and management working on cutting costs, it’s hard to bet against Amazon in 2023.

If Amazon were executing as strongly as MercadoLibre, the stock would be one of the best stocks to own in the market. But, because MercadoLibre is a Latin American e-commerce retailer, it’s lesser known, misunderstood, and often ignored due to its foreign status.

But ignoring MercadoLibre is a massive mistake. With its commerce and fintech offerings, MercadoLibre plays a considerable role with Latin American consumers. As a result, its revenue streams have rapidly expanded when U.S. commerce and fintech companies have seen growth slow. In Q3, total revenue was up by 61% year over year to $2.69 billion, with fintech exploding 115% higher to $1.23 billion. While commerce grew noticeably slower than last year, it still delivered a respectable 33% growth.

Furthermore, the take rate (how much revenue MercadoLibre takes from each processed transaction) rose for both the commerce and fintech wings.

With each division growing and exercising pricing power over customers, that’s a positive sign. Throw in the company’s growing sales by 19% on Brazil’s Black Friday (a new record) and the stock trading at its lowest price-to-sales ratio since 2010 and 2023 is looking like a strong recovery year for MercadoLibre.

With the roller coaster of demand Airbnb has experienced over the past two years, investors wouldn’t be surprised if Airbnb made some false steps along the way. However, the company has stayed the course and is looking better than ever.

In Q3, gross booking value rose 31% year over year to $15.6 billion, driven by a 25% increase in nights and experiences booked. The future also looks bright, with management stating travel demand remains strong, and new hosts are joining the platform looking to make some extra money — a similar mechanism to what was seen during the Great Recession in 2008.

Unlike some other high-flying tech stocks Airbnb is sometimes associated with, it produces solid profits, generating $3.3 billion in free cash flow (FCF) over the past 12 months and $1.2 billion in net income in Q3.

Despite strong demand, excellent execution, and elite profitability, Airbnb’s stock is valued like its business will rapidly decline. In fact, it’s trading at a far cheaper level than many of its hotel competitors despite a superior margin profile.

None of these companies deserves to trade at a premium to Airbnb, yet they do. This leaves tremendous upside for Airbnb stock, and investors should take notice and establish a position in Airbnb.