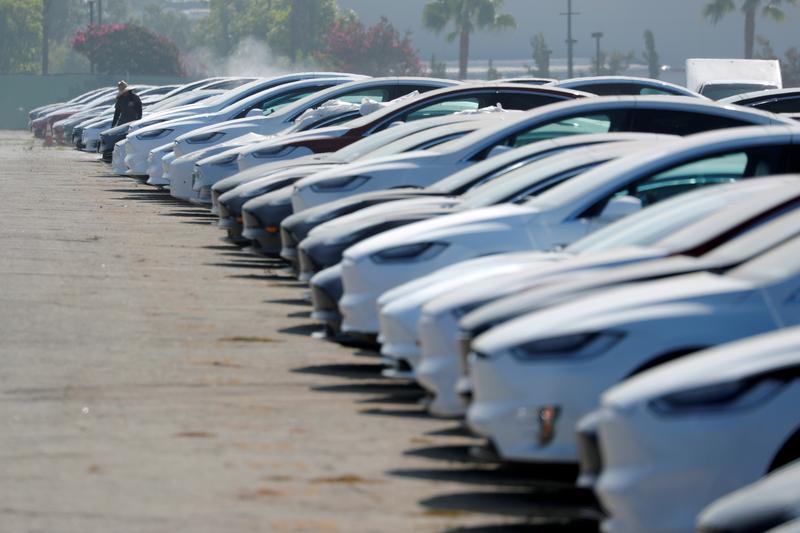 (Reuters) – Shares of Tesla Inc rose to a record high on Friday in a frantic day of trading as investors geared up for the electric carmakerâ€™s much anticipated entrance into the benchmark S&P 500 index.

The company headed by billionaire Elon Musk on Monday will become the most valuable ever admitted to Wall Streetâ€™s main benchmark, accounting for over 1% of the index. The shares have surged some 70% since mid-November, when its debut in the S&P 500 was announced, and have soared 700% so far in 2020.

Teslaâ€™s addition to the S&P 500 is forcing index-tracking funds to buy about $85 billion worth of the shares by the end of Fridayâ€™s session so that their portfolios reflect the index, according to S&P Dow Jones Indices. Those funds simultaneously have to sell other S&P 500 constituentsâ€™ shares worth the same amount.

Shares swung between gains and losses late in the session before surging in price and volume near the end of trading.

The move was likely a result of last-minute buying in preparation for its addition to the S&P 500, said Dennis Dick, proprietary trader at Bright Trading in Las Vegas.

Turnover in Tesla shares topped $120 billion shortly after 4 p.m. EST (2100 GMT), with volume exceeding 200 million as the stock traded after hours, according to Refinitiv data. Trading volume for Tesla has averaged 53 million shares over the past 10 sessions.

Tesla shares were falling in after-hours trading, last down 3%.

Teslaâ€™s inclusion may be a double-edged sword for index trackers, who are buying its volatile shares after this yearâ€™s massive run-up.

â€œIndex-based funds will be paying a higher price than those that bought the stock when the entry date was announced, but will benefit as the fund better represents the U.S. large-cap universe,â€ said Todd Rosenbluth, head of ETF and mutual fund research at CFRA. â€œTeslaâ€™s absence in the prominent index has been notable in 2020.â€

Some strategists expect Teslaâ€™s inclusion to ripple through the S&P 500 itself. Tesla is a â€œvolatile stock,â€ noted Lindsey Bell, chief investment strategist with Ally Invest, moving an average of 4.1% a day in 2020.

Others, however, say Teslaâ€™s addition is unlikely to exacerbate gyrations in the broader index. Had the stock been included in the S&P 500 all year, it would have increased implied volatility on the benchmark index by only a small amount, according to a study by UBS strategist Stuart Kaiser.

Actively managed funds that benchmark their performance against the S&P 500, many of which until now have avoided investing in one of Wall Streetâ€™s most controversial stocks, will also be forced to decide whether to own Tesla.

â€œEveryone has known this is coming for two or three weeks, so the real question now is if it continues to be an outperformer and, if so, then what is the catalyst,â€ said Thomas Hayes, managing member at Great Hill Capital LLC in New York.

California-based Teslaâ€™s stock surge has put its market value at about $660 billion, making it the sixth most valuable publicly listed U.S. company with many investors viewing it as wildly overvalued.

Tesla is by far the most traded stock by value on Wall Street, with $18 billion worth of its shares exchanged on average in each session over the past 12 months, easily beating Apple, in second place with average daily trades of $14 billion, according to Refinitiv.

About a fifth of Teslaâ€™s shares are closely held by Musk, the chief executive, and other insiders. Since the S&P 500 is weighted by the amount of companiesâ€™ shares actually available on the stock market, Teslaâ€™s influence within the benchmark will be slightly diminished compared with its overall value.