The UK averted the damage of a complete breakdown in formal trade ties with the EU, but it might still confront the biggest reset of an advanced economyâ€™s commercial relations since World War II.

The 11th-hour pact on Thursday clinched by British Prime Minister Boris Johnson allows the final phase of Brexit to proceed with a relatively orderly divorce on Friday next week.

However, the UK still faces a rude awakening, as a new customs regime of form-filling and monitoring ends the seamless trade arrangements that have been in place since the 1970s. 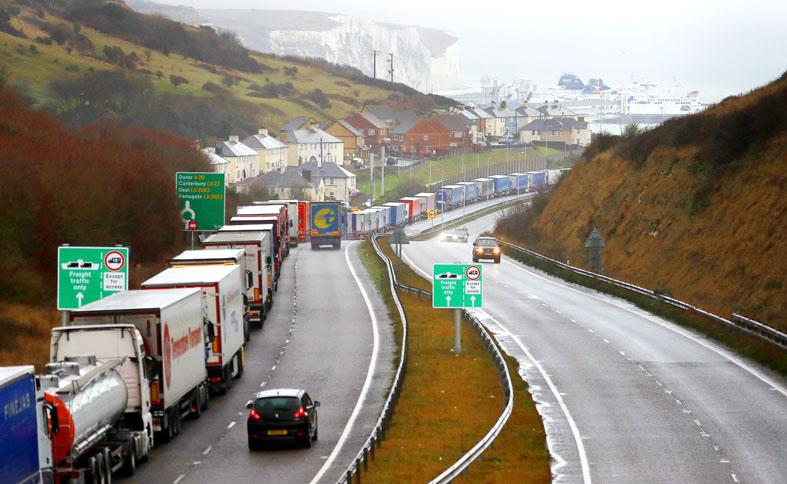 That risks disruptions at ports and even food shortages in supermarkets, while bottlenecks could immediately translate into softer economic growth and higher prices.

The agreement avoids the shock from a no-deal, which Bloomberg Economics had forecast would knock an additional 1.5 percent off output next year as tariffs took effect, deepening an expected recession from the latest COVID-19 restrictions.

Yet longer term, the new frictions mean that growth is forecast to be 0.5 percentage point lower per year for the next decade than if the UK had stayed in the bloc.

The UK this month got a taste of potential chaos, when France shut down traffic across the English Channel because of the escalation of the COVID-19 outbreak in the UK. That left thousands of trucks backed up on roads outside the Port of Dover.

The UK would at least enjoy a tariff-free cushion for its manufacturers as they trade with a market that currently buys more than 40 percent of the its exports.

However, that comfort eludes the bankers, architects and consultants in its lucrative service industry â€” they were not part of the accord.

Foreign investment could suffer once the UK no longer offers simple access to the EUâ€™s single market, which has long been a major incentive for companies.

Just this month, Nissan Motor Co, which had been considering its Sunderland plant for its new electric vehicle, opted instead to make it in Japan.

Citigroup economist Benjamin Nabarro said in a report that the new deal constitutes â€œthreadbare access combined with fewer medium-term assurancesâ€ that would weigh heavily on the British growth over the coming years.

The Brussels agreement closes a chapter on a rare period when British voters were granted full consent in a referendum to determine the UKâ€™s economic destiny.

Four and a half years on, the British economy is to start weathering the challenges of the 21st century alone, less able to access the opportunities of its biggest and closest trading area, but also less constrained by its rules.

The gamble that such a break will pay off in the long run is what Johnson is wagering. The British government will likely set off on a series of bilateral negotiations over trade deals, with the US among the priorities.

Any near-term economic pain will likely be overshadowed by the immediate bounce from a year of unprecedented shutdowns to contain the COVID-19 pandemic.

The British economy is set to grow more than 5 percent next year as it rebounds from the huge slump forced by the pandemic, according to economist forecasts compiled by Bloomberg earlier this month â€” although COVID-19 restrictions might mean that there is a downside risk to those numbers.

Comments will be moderated. Keep comments relevant to the article. Remarks containing abusive and obscene language, personal attacks of any kind or promotion will be removed and the user banned. Final decision will be at the discretion of the Taipei Times.